If you use Core Data in your apps, you might be aware that the larger and more complicated your set up becomes, the harder it is to debug. It's at this point where you might start to get frustrated with Core Data and its black-box kind of implementation. You might think that you simply have to trust that Core Data will do the ideal thing for your app.

Furthermore, you might have a set up with multiple managed object contexts, each confined to its own thread. And when your app crashes sometimes, you think it's related to Core Data in one way or the other, but you're not quite sure how to debug it. Especially because your app only crashes sometimes rather than all the time.

Knowing what Core Data does under the hood

Sometimes when you use Core Data you want to open the underlying SQLite file to see whether your data is actually stored as expected, or maybe you want to inspect the database structure. To do this, you need to know where Core Data has stored your SQLite file, this can be especially challenging when you're running on the simulator. Because let's be honest, we don't know what the UUID of our simulator is and we most certainly don't want to have to figure out its location every time we need to find our SQLite file.

Luckily, you can use a Launch Argument to get Core Data to log some information to the console. To add a Launch Argument, use to top menu in Xcode to go to Product -> Scheme -> Edit Scheme... (cmd + >). Select the Run configuration and go to the Arguments tab as shown in the following screenshot: 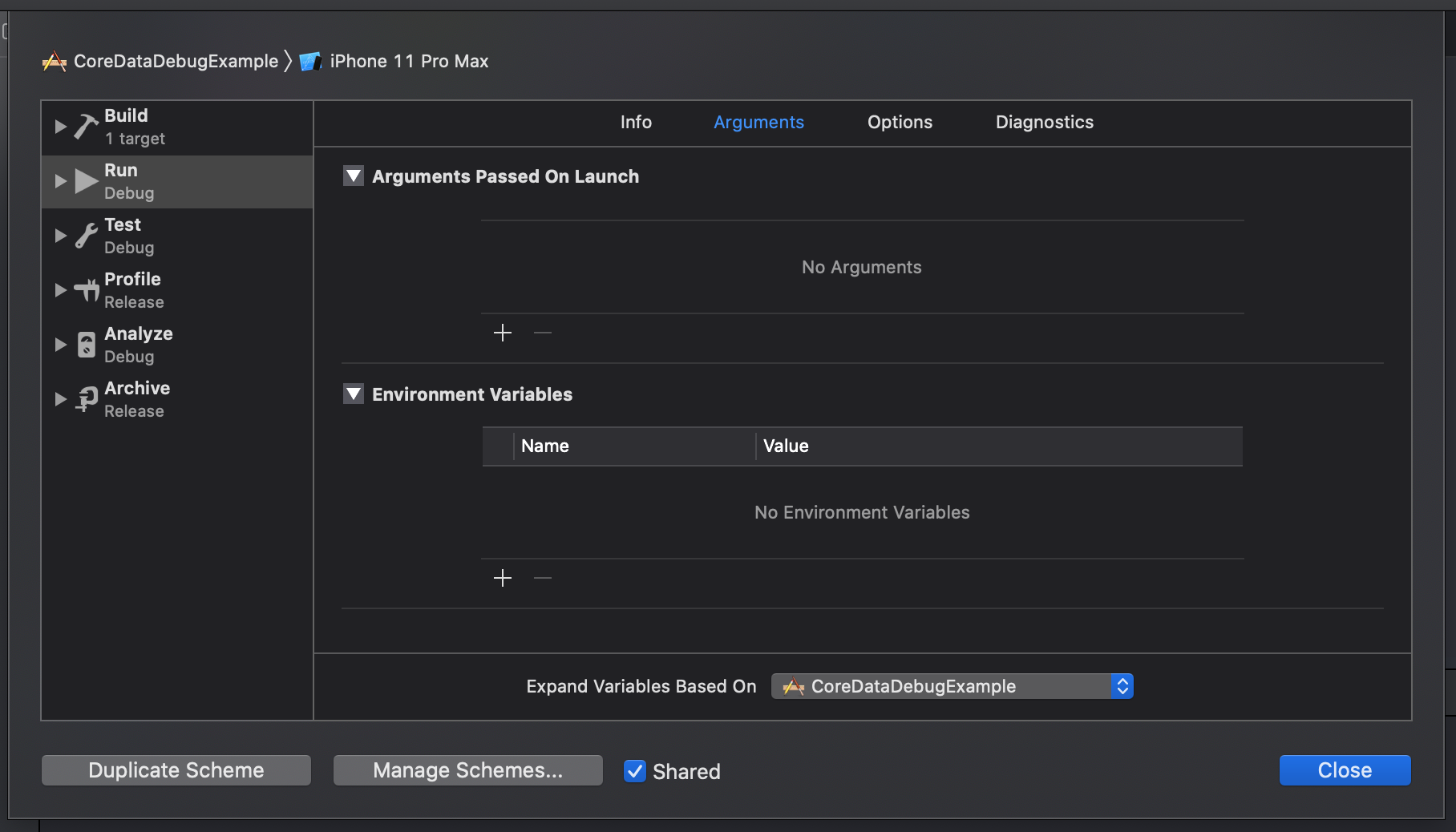 To get Core Data to log information to the console, click the + button under the Launch Arguments and add the following argument:

The result should look as follows: 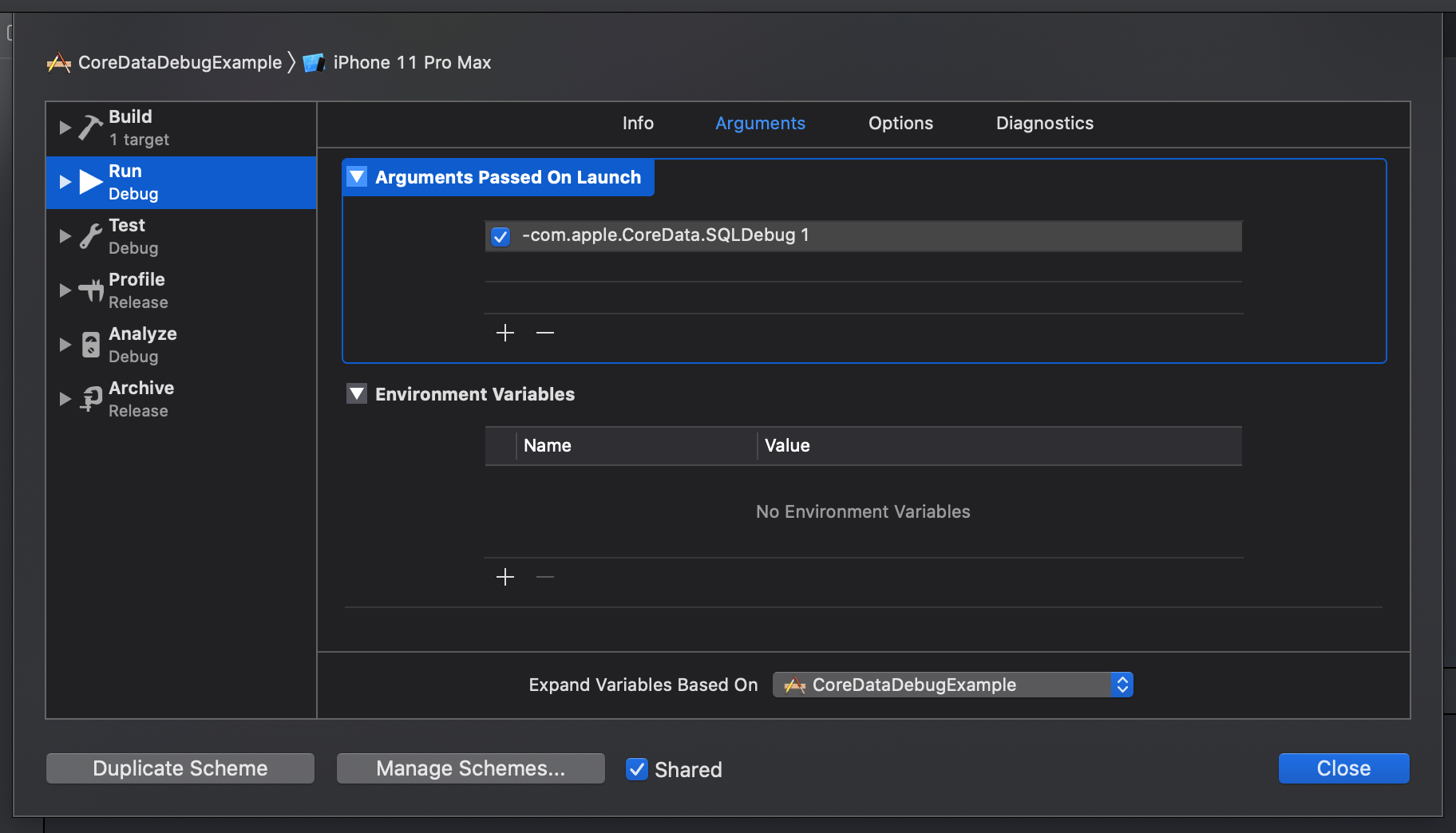 If you run your Core Data app after setting this Launch Argument, Core Data will start logging basic information like where the backing SQLite file is stored, and what queries are executed.

You can increase the log level all the way up to level 4, at that point Core Data will log pretty much everything you might want to know about what's going on under the hood and more. For example, this might help you notice that Core Data is performing lots of SQLite queries to fetch object relationships. And based on that discovery you might decide that certain fetch requests should automatically fetch certain relationships by setting your fetch request's relationshipKeyPathsForPrefetching property.

These four log levels give you a lot of information that you can use to improve your apps. Of course, the usefulness of certain log levels like level four depends entirely on your knowledge of SQLite. But even if you're not well versed in SQLite, I recommend to take a look at all of the log levels sometimes, they can produce some interesting outputs.

One of the biggest frustrations you might have with Core Data is random crashes due to threading problems. You're supposed to use managed object context and managed objects only on the threads that they were created on, and violating this rule might crash your app. However, usually your app won't crash and everything is fine. But then every now and then a random crash pops up. You can tell that it's Core Data related but you might not be sure where the error is coming from exactly.

Luckily, the Core Data team has thought of a way to help you get rid of these crashes. In Xcode, you can add the -com.apple.CoreData.ConcurrencyDebug 1 Launch Argument to run Core Data in an extra strict mode. Whenever Core Data encounters a threading violation, your app will immediately crash and Xcode will point out the exact line where the violation occurred.

I can recommend everybody to use this Launch Argument in development because it will help you catch threading problems early, and forces you to fix them right away rather than getting some nasty surprises when your app is already published to the App Store.

While you can’t eliminate all bugs and performance issues with debug flags, it does help to have some tools available that you can use to make your problems more visible. Whether it's making you app crash if you break Core Data's threading rules, or gaining insights into the different SQLite queries Core Data does under the hood, it's always good to understand how your code behaves under the hood.

I hope these debug flags will help save you loads of time, just like they do for me. If you have questions, feedback or simply want to reach out to me, don't hesitate to contact me on Twitter