If you've ever wanted to decode a bunch of JSON data into NSManagedObject instances you've probably noticed that this isn't a straightforward exercise. With plain structs, you can conform your struct to Codable and you convert the struct from and to JSON data automatically.

For an NSManagedObject subclass it's not that easy.

If your Core Data data model is configured to automatically generate your entity class definitions for you (which is the default), you may have tried to write the following code to conform your managed object to Decodable:

If you do this, the compiler will tell you that it can't synthesize an implementation for init(from:) for a class that's defined in a different file. Xcode will offer you some suggestions like adding an initializer, marking it as convenience and eventually the errors will point you towards making your init required too, resulting in something like the following:

Once you've written this you'll find that Xcode still isn't happy and that it presents you with the following error:

Since we need to define our managed object subclass ourselves to add support for Codable, you need to make some changes to how Xcode generates code for you.

Open your xcdatamodeld file and select the entity that you want to manually define the managed object subclass for. In the sidebar on the right, activate the Data model inspector and set the Codegen dropdown to Category/Extension. Make sure that you set Module to Current product module and that Name is set to the name of the managed object subclass that you will define. Usually, this class name mirrors the name of your entity (but it doesn't have to). 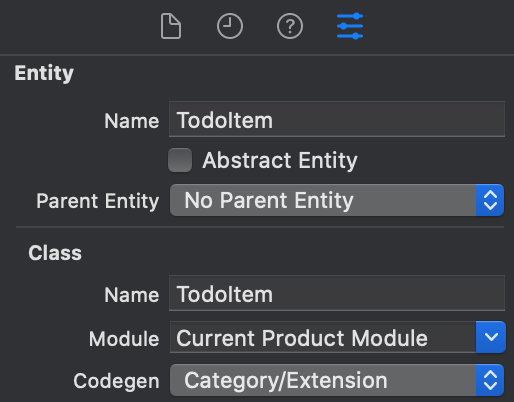 After setting up your data model, you can define your subclasses. Since Xcode will generate an extension that contains all of the managed properties for your entity, you only have to define the classes that Xcode should extend:

Once you've defined your managed object subclasses, Xcode generates extensions for these classes that contain all of your managed properties while giving you the ability to add the required initializers for the Decodable and Encodable protocols.

Conforming an NSManagedObject to Decodable

The Decodable protocol is used to convert JSON data into Swift objects. When your objects are relatively simple and closely mirror the structure of your JSON, you can conform the object to Decodable and the Swift compiler generates all the required decoding code for you.

Unfortunately, Swift can't generate this code for you when you want to make your managed object conform to Decodable.

Before I get to the decoding part, we need to talk about managed objects a little bit more.

This can be achieved through JSONDecoder's userInfo dictionary. I'll show you how to do this first, and then I'll show you what this means for the initializer of TodoItem from the code snippet I just showed you. After that, I will show you what TodoCompletion ends up looking like.

When we use this instance of JSONDecoder to decode data, the userInfo dictionary is available within the initializer of the object we're decoding to. Let's see how this works:

In the initializer for TodoItem I try to extract the object at CodingUserInfoKey.managedObjectContext from the Decoder's userInfo dictionary and I try to cast it to an NSManagedObjectContext. If this fails I throw an error that I've defined myself because we can't proceed without a managed object context.

After that, I call self.init(context: context) to initialize the TodoItem and associate it with a managed object context.

The last step is to decode the object as you normally would by grabbing a container that's keyed by CodingKeys.self and decoding all relevant properties into the correct types.

Note that Core Data still uses Objective-C under the hood so you might have to cast some Swift types to their Objective-C counterparts like I had to with my Set<TodoCompletion>.

For completion, this is what the full class definition for TodoCompletion would look like:

This code shouldn't look surprising; it's basically the same as the code for TodoItem. Note that the decoder that's used to decode the TodoItem is also used to decode TodoCompletion which means that it also has the managed object context in its userInfo dictionary.

If you want to test this code, you can use the following JSON as a starting point:

Unfortunately, it takes quite a bunch of code to make Decodable work with managed objects, but the final solution is something I'm not too unhappy with. I like how easy it is to use once set up properly.

Adding support for Encodable to an NSManagedObject

While we had to do a bunch of custom work to add support for Decodable to our managed objects, adding support for Encodable is far less involved. All we need to do is define encode(to:) for the objects that need Encodable support:

For completion, this is what TodoCompletion looks like with Encodable support:

Note that there is nothing special that I had to do to conform my managed object to Encodable compared to a normal manual Encodable implementation.

If you have any questions about this post or if you have feedback for me, don't hesitate to shoot me a message on Twitter.