In Xcode 12 you can create projects that no longer use an AppDelegate and SceneDelegate to manage the application lifecycle. Instead, we can use Swift's new @main annotation to turn a struct that conforms to the App protocol into the main entry point for our applications.

When you create a new project in Xcode 12, you have the option to use the SwiftUI App application lifecycle for your SwiftUI project.

Adding a Core Data model file to your project 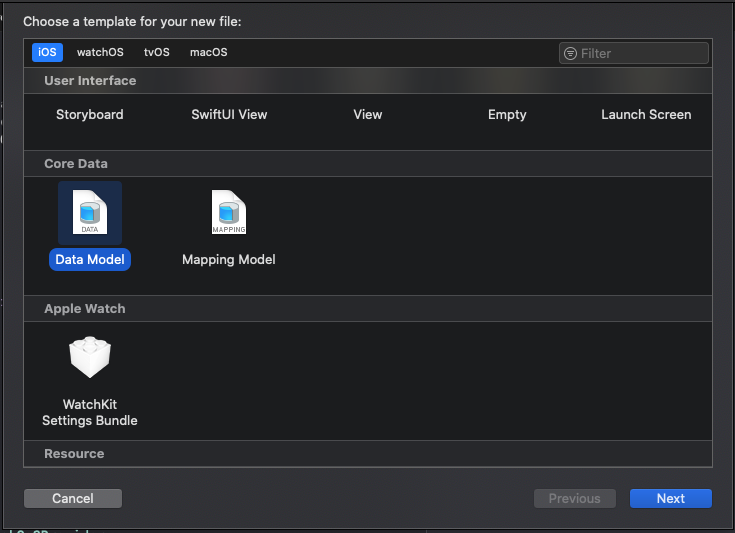 After selecting this, pick a name for your model. The default that Xcode used to pick is the name of your project but you can choose any name you want.

And that's all there is to it. Your Core Data model file is now added to your project and available to use by an NSPersistentContainer.

Let's look at the code needed to instantiate an NSPersistentContainer:

All you have to do when initializing a persistent container is tell it which model file to load by passing the model name to the initializer, and then call loadPersistentStores on your container instance. After doing this your Core Data stack is initialized and ready to go. From here you can insert the container's viewContext into your app's environment using the @Environment property wrapper in your View, or you can pass it around in other ways.

Remember that you don't have to initialize your persistent container in your App struct. You could also create a PersistenceManager object for example:

This would work perfectly fine.

The old version of the Core Data stack generated in your AppDelegate contains one extra feature which is to automatically save any changes when your application goes to the background. You can mimic this behavior by listening for the UIApplication.willResignActiveNotification on NotificationCenter.default.

Unfortunately, I haven't found a way yet to subscribe to this notification from within the App struct because it's a struct and using the closure based listener complains that I capture a mutating self parameter when I access persistentContainer.

The easiest way to work around this is to subscribe within a specialized PersistenceManager like the one I showed you earlier:

And with that, you should have all the information needed to start using Core Data in your SwiftUI 2.0 applications

In this week's post I showed you how you can initialize Core Data from anywhere in your app, allowing you to use it with SwiftUI 2.0's new application lifecycle.

You saw that all you need to do add Core Data to your app, is creating a model file, and initializing an NSPersistentContainer object. This works from anywhere in your app, including apps that use the old AppDelegate based application lifecycle.